Posted on March 9, 2018 by aridelessordinary

I opened the living room door to find a room full of people on their mobile phones interacting with a quiz show on the telly. There were disney-esque purple princesses throwing green slime at astronauts, gaudy castles and exploding pyramids, all set to  tension-inducing synthetic music, which increased in pace and pitch as the contestants neared their goal.  I had landed on another planet.

This is a blog about going on a walking week-end in Snowdonia, but really it’s about  enjoying the hospitality of strangers, making new friends and ‘getting over myself’.

The Snowdonia weekend was planned as a ‘leg strengthener’ for a trekking holiday in Nepal, as well as an opportunity for the group of 4 intrepid trekkers to get to know each other. I was a friend of Kate, and Kate was a friend of Nicki and they were both friends of Adan, whose parents lived in Chester and kindly agreed to put us all up for the weekend.

And so it was I found myself north of Watford Gap on a Saturday night, sitting on a sofa wedged between two phone-wielding contestants of the PS4 quiz game called Knowledge is Power (I’ve just googled it). My phone is always telling me it is running out of space, and anyway surely joining in would not only expose my ineptitude with my mobile phone, but also my appalling memory for general knowledge? The mere thought of it made my palms sweat.

After half an hour and a bit of deep breathing, I started to relax.  They weren’t going to judge me or throw me out into the sub-zero temperatures for not taking part. I realised that if I had had the guts to compete, the experience would have been less confronting, but by the time I ‘got over myself’, they presented me with another challenge; Cards against Humanity (which I had vaguely heard of).  For those that don’t know, Cards Against Humanity, is described by Wikipedia as a party game in which players complete fill-in-the-blank statements using words or phrases typically deemed as offensive, risqué or politically incorrect printed on playing cards. I’m not going to say I wasn’t shocked by some of the cards, but it did bring a tear to the eye, and what’s more I won! Oh what hidden depths.

I feel I should at least mention the walking at some point, but not before confessing that my favourite game of the weekend involved me humming ‘I don’t like Mondays’, which it turns out was quite beyond me! Enough!

We picked one of the coldest weekends of the winter for our training weekend, but the upside was that we had 3 days of cloudless blue skies.  It was a rare treat and in spite of the occasional -10C wind chill factor, I think we all knew how lucky we were to see some of the UK’s finest wild scenery at it’s best. We climbed Snowdon via the Rangers route, followed by Cader Idris and small hike up Moel Famau to warm down on day 3. Here are some photos taken by Adan and his Dad Jeff:

I sat on the top of Moel Famau, admiring the views to the snow-capped Snowdonian mountains, watching families and dogs milling around the popular summit. There were whole families out for a pre-lunch amble complete with Gran, all marching their way to the top, most of them wearing clothes that you’d do your Saturday shopping in. Not a grumble to be heard.  I couldn’t help thinking that if we were south of the  Watford Gap, few would have braved the -10 degree wind chill, and those that did, would be kitted out with clothes that cost the earth and were suitable for an expedition to the arctic. 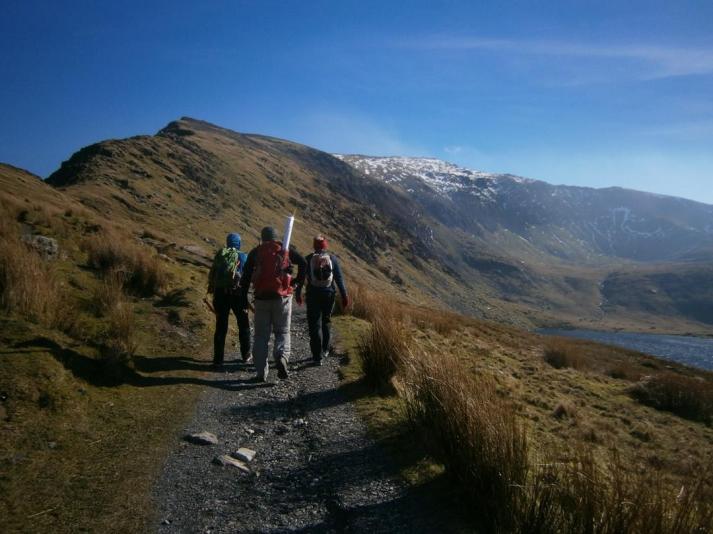 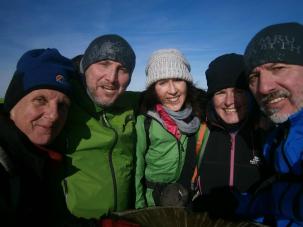 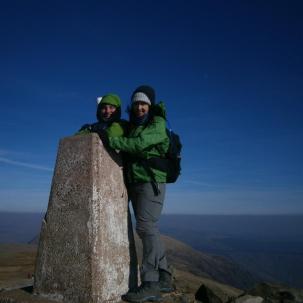 If I ever need a break from the over-entitled, over-stated and over-crowded cool of the south, it’s only a train ride away!

My thanks to Adan and this parents Jeff and Paula, for feeding us, driving us around and most of all for welcoming us into their home and allowing us to share (and win) their family games!

If anyone is interested in following the Nepal Trek, please follow this blog (either by email or wordpress) and await the next post! Adan is doing the trek for a charity called Action Tutoring, an education charity that gives free tutoring to disadvantaged kids.  He has set up a charity giving page here.

← A Girls Own Adventure
Ain’t no mountain high enough …….. →