Posted on June 24, 2017 by aridelessordinary

This is the story of the Bella Velo Cycling Clubs summer trip to the sea. It was a road ride full of unforeseen adventures that pushed us all to various limits. We conquered extreme heat, punctures, thigh-burning hills, came close to mutiny and possibly learnt a little about riding off-road, but most of all it was a rollicking good day out!

When I saw a Bella Velo FB invitation to ride along the Pilgrims Way to Whitstable, with the promise of fish and chips by the sea, I was both interested and intrigued.  Intrigued because the BV ladies don’t normally stray so far from West London, and normally run training rides with an emphasis on the performance side of cycling (speed, endurance …..).  This was an A to B ride along an ancient trackway, more renowned for its history than it’s Strava segments!  It turned into something of an epic; not a ‘monster, never to be repeated’ kind of epic, but an epic none the less.

The day got off to a strange start for me due to an unusual early morning dream, which I hoped wasn’t an omen for things to come.  It involved getting caught up in a massive Hindu procession (complete with elephants!), along Whitstable High Street, forcing me to miss my rendez-vous at Cadence bike shop.  I put it down to worrying about having to ride at a slightly faster pace than I would normally ride.

Unlike my dream, I was up early and arrived at Cadence bike shop bang on the pre-arranged meeting time.  After standing there alone for 50 minutes,  I momentarily wondered if they’d bumped into the Elephants, but was soon thinking much worse, so I was very relieved to see Helen leading a large group across the traffic lights at the top of Anerley Hill.  The GPS route was to blame for the delay, and if ever there was an augur for things to come, it was that.

When I say we set-off at a cracking pace, I know it is all relative, but as we climbed Beddlestead lane up the back of the North Downs, it became abundantly clear that I was off the pace, and by the top, a good few minutes  behind the pack.  It was advertised as a social ride, it’s just that I lacked the oxygen to speak, and from a psychological perspective, being a ‘tail-end Charlie’ was proving a challenge, so at this stage I was thinking along the lines of continuing until lunch-time, then going at my own pace.  For those reading this that question why I choose such an exhausting form of humiliation, I say there is nothing wrong with humility, and knowing that I have the ability to follow my Garmin, and the strength to go the distance, gives me the confidence to ride with faster groups……..as far as I can. (I found out later that most people had predicted that we would  be there by lunch-time and had planned to be on the 2 pm train home, a profoundly un-realised dream, as it turned out) 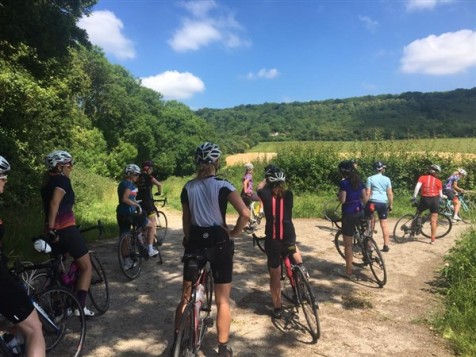 The end of the road.

Any which way …pushing, carrying or riding

We swooped down the steep chalk escarpment, and turned left onto a small lane and our journey along the Pilgrims Way began. This section of the ancient by-way, as with many other sections, is a fun roller-coaster ride on a single-track tarmac road, with great views of the Chalk Downs to the left and the Kent Weald to the right.  With the long climb up the downs out of the way, I managed to keep up, and we rode well as pack, making good progress until Trottiscliffe, where the road came to an untimely end at a No Entry sign.   Keeping to the GPS track that everyone had downloaded (herein referred to as the purple line), was looking like it would get us into a spot of legal trouble.

Having ridden this section earlier on in the year, I knew that it was possible to continue along a footpath at the base of the chalk escarpment, but persuading some people that their bike wasn’t going to explode or dis-integrate was difficult.  We didn’t really have much choice as keeping on the tarmac would mean back-tracking, which was equally unappealing to some people.  So off we set up the side of a field to join the ‘real’ Pilgrims Way, through the woods on smooth compacted mud.  I suddenly found myself propelled from the back to the front of the pack telling people to get their bums off the seat and keep their upper body loose!  Although there was a bit of dissent among the ranks, I also detected a few smiles at the adventure of it all.

Apart from a quick pit-stop at the Duke of Wellington in Ryarsh, following ‘the purple line’ continued to challenge our GPS and riding skills, taking us on a smorgasbord of small tarmac roads, nettle-lined footpaths, jeep tracks, lock-gates and pedestrian flyovers, passed housing estates, vineyards, pretty villages and across the Medway at Allington Lock to the little village of Boxley, where Helen was reliably informed by the locals in the Kings Arms, that the ‘purple line’ was not the most direct route to Whitstable and involved a thigh-burning hill.  I detected a distinct and growing lack of enthusiasm for much more ‘road less traveled’. 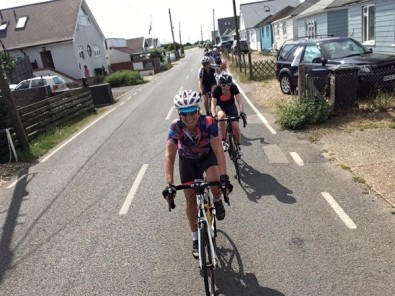 I’m not entirely sure what happened next, except to say that I found myself continuing on ‘the purple line’ along a beautiful section of the Pilgrims Way with Lou, who vowed she wouldn’t leave me in a ditch somewhere gasping for air, and I vowed that my Garmin and I would get her to Whitstable.  We had no idea whether the group was in front, behind or piling along the A2, but regardless of which group you where in, the last big challenge of the day had to be faced.  We had to get back over the North Downs, which meant going up the chalk escarpment at Hollingbourne. In the heat of one of the hottest days of the year and with legs sadly depleted, I think I can speak for most when I say I was accessing the dregs of my resources.

With the worst hill done and dusted we were enjoying a speedy descent when we suddenly came upon the rest of the group mending a puncture, so quite by chance we were back together again.  As we rode the last 15 miles into Whitstable, a sort of tired calm descended on the group, a collective determination to see it through, and as the sea came into view over the top of the  sea-wall a little cheer went up.  Out of 15 starters, 11 pairs of legs rode down Whitstable High Street to the harbour, to a very well-earned portion of Fish and Chips, and not an elephant in sight!  Well done all!

If you are interested in getting out on your bike more often, and you live in London here are a few links that you might find useful:

Bella Velo Cycling Club: This is a Facebook Group run by women, which has turned into a great forum for anything bike related happening in West London.  They organise their own training and social rides, but also advertise other club and group rides, as well as the occasional themed social evening. Catch them if you can, they’re great fun!

Dirty Weekend: Advertised as London’s first fun and social cycling club.  Offers a very varied menu of activities and levels of riding, with emphasis on the social.

Breeze Rides: Set-up by British Cycling to encourage women of all abilities to ride, from the competitive level to the total beginner. If you don’t know where to start, but know you want to get out and ride your bike more, these are the guys to get in touch with.  Just use their simple search box at the top of their website to find, groups, rides or cycling buddies near you. 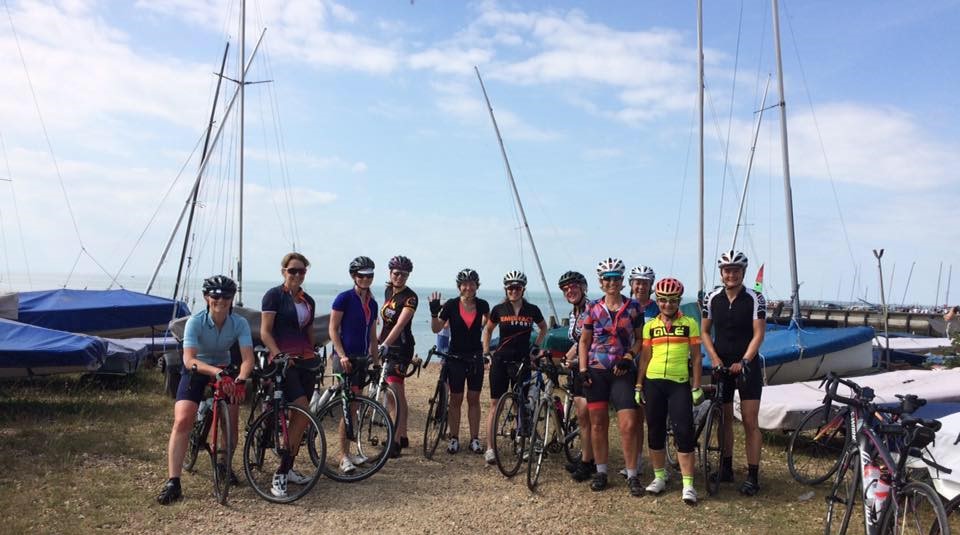 5 Comments on “A Pilgrims Tale”