Posted on June 8, 2016 by aridelessordinary

Set off in fine weather through Bourg and Seez. 30 kms of 5 & 6% ascent on very wide road with very light traffic.  Unlike any col I have previously ridden in its consistent but relatively easy gradient.  Kept on the big ring (50/32 or 34) all the way. Arrived at La Rosiere, a small skiing village, looked behind me and realized there was a huge rain cloud sweeping up the valley, so decided to press on.

Passing large banks of snow on the side of the road, I was very glad to see the top, albeit in the distance.  I arrived with freezing rain blowing at my backside and made a hasty retreat to the restaurant, where the waitress showed me to a table next to a log burning stove. Nice.  I ate a plate of Tartiflette and watched the rain increase in intensity and reluctantly left after the shower had passed, knowing that I was going to suffer.  10 mins later I couldn’t feel my feet or hands and my knees where like ice blocks. As I descended various body parts came back to life.

I decided to take the scenic diversion passed the ‘Route Barre’ sign and duly noted a sink hole big enough to swallow a bike. I also noted Chapelle Saint Michel perched on a little hillock but was too cold to investigate.  My first Col of the holiday and a few lessons learnt. 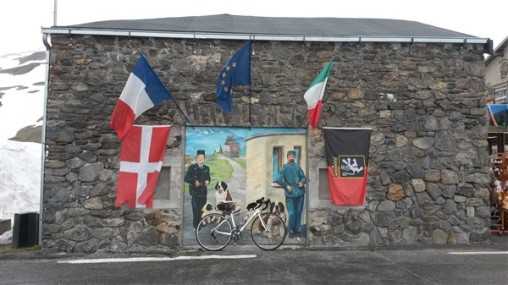