Posted on June 20, 2016 by aridelessordinary

I awoke from a terrible nights sleep due to eating a huge portion of pasta the previous evening, and the women in the room upstairs going to the loo at least 3 times.  I couldn’t decide between Col de Madeleine (with a train ride) or going up Cormet d’Areches, with the tantalising possibility of completing the ‘Roselend Epic’; a loop ride that included 3 cols and had been taunting me all week.  The weather forecast predicted the best weather for the last 10 days, which wasn’t saying much, but I was aware that it was the last good day before my return to the UK. I set off to do Cormet D’Areches, or at least ride up as much of the valley as possible.  It seemed more exciting than a train ride followed by an ‘up and back’ route.

The Ride. I climbed the small set of switch-backs that Sam and I had discovered in the van, and on through Valezan and Granier.  It seemed like I had been waiting an age to ride up this valley, and what had stopped me was a degree of fear for it’s remoteness, coupled with not knowing the state of the un-surfaced road at the summit.

I rode past the ‘Cormet d’Areche road closed’ sign, taking no heed, steadily climbing the valley-side above Granier. When I glanced back the view of Mont Pourri peeping through the clouds was breath-taking. It is the highest and most eye-catching mountain in the valley. The road climbed through the tall pine forests and out into the high Alpine meadows. It was the toughest climb of the trip and coupled with a slight headache I kept doubting my ability to make it to the top.  I finally reached the end of the tarmac, but the un-surfaced road gave me no excuse to turn back as it was hard-packed with only a small amount of loose gravel.  As I climbed higher, my resolve to reach the col hardened, and I started to contemplate doing the ‘Roselend Epic’ rather than turning for home at the top.

I decided to change the route on my GPS to reflect my change of plan, but in doing so completely confused the device, and as I neared the summit my ‘battery low’ sign started flashing.  Was it a sign? Should I turn back once I had ‘bagged’ the col, or was I just using it as an excuse?  After all, I had studied this route so many times, surely I could navigate it by memory?

I took the obligatory picture at the top and carried on down the other side.  It was only after 500 metres or so, that I realised I had committed to the longer ride without giving it any serious consideration.  By now the road was rocky with a lot of loose gravel but as I slowly picked my way down it, I knew that I wasn’t going to turn the bike around. So that was decided then; I was on for the biggest day of my trip.

As I turned a bend in the road a whole new landscape opened up to me; the Beaufortain Massif.  I was surrounded by 360 degrees of beautiful alpine landscape. Soon back on tarmac, albeit extremely patchy, I swooped passed a huge dam at the end of Lac du Guerin, and on down until I could see the start of the switch-backs up to Col du Pre; a sobering sight.  I stopped at the bottom to eat the last of my Tesco’s flap jack squares and an egg from breakfast, washed down with ice cold alpine water, and started the second ascent of the day.  It was a short but steep 6 km, with gradients up to 10.6%, and very hot.  I stopped at a restaurant at the top for a coffee and a myrtle tart, and filled my water bottle with water that ‘wasn’t always drinkable’ according to the waitress. It was better than nothing and I knew there would be plenty of places to re-fill now that I was nearing a more populated area.

So, onwards and downwards again, with the Lac de Roselend in my sights, and soon behind me. I emptied and re-filled my water bottle with icy water from a roadside tap at the start of the final ascent of the day.  7 km up to the Cormet de Roselend, playing cat and mouse with a group of German road-bikers. Their back-up van kept over-taking me and parking up, perhaps thinking I needed a lift.  If only they knew how close I was to completing my own personal challenge, and that I would rather crawl to the top with the bike strapped to my back than accept a lift. I realised at this point that, bar a massive mechanical hitch, my mission was almost accomplished.

There was just one last thing left to be done, a 20 km descent into Bourg Saint Maurice, and if the last 60 km had blown my mind, then the next 20 took it to another level.  No switch-backs here, just massive sweeping turns passing high snow-capped mountains, and valleys begging to be explored.  As I flew down the road, tilting into the curves and picking up unrecorded speeds, I felt the pressures of the day lift and found myself singing, and then a lump in my throat.

Later, I sat in La Cantina next to the roar of the white water of the Isere river, with a large glass of biere blonde, and realised that nobody knew about my day but me, and for some reason I wanted to keep it that way for a little longer; like someone who’d accidentally stumbled on a nugget of gold. I drank another glass before turning my wheel towards home, after what has to be one of my most awesome days on a bike, ever.

The Verdict.  Need I say more?  Can’t be improved on.  Put it on your bucket list!  I have since discovered that Cormet de Roselend is considered by some to be in the World top 50 ascents, but I like to think that approaching it from the top and descending it, is even more fun.

click here to go to the route in ridewithgps.com 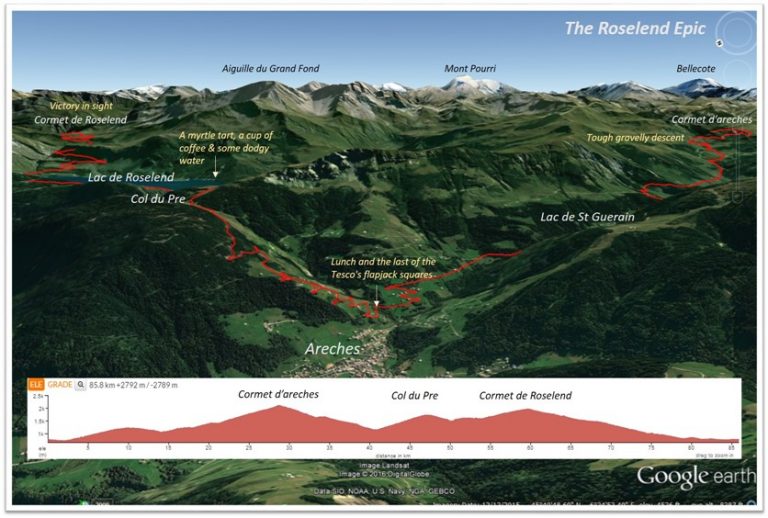