Posted on September 30, 2016 by aridelessordinary

The plan was to ride along the valley to Villaroger and then try the un-surfaced road up to Les Arc 2000, keeping high above Les Arc 1600 & 1800 and linking with Peisey Nancroix ride that I did last trip.  A higher than average balcony ride above the Isere valley was what I had in mind.

The Ride.  I set the alarm to ensure an earylish start, knowing that the weather was wall to wall blue sky and I’d better make the most of it.  It was cold as I set off along the valley to Bourg and I had to use my ‘*imp jacket’ (a black incredibly  thin and clingy shower proof jacket that looks like a dustbin bag but is incredibly effective and reduces to the smallest of sizes ……have you got the picture?).

Once I’d skirted the less pleasant aspects of Bourg, I was treated with the lovely quiet forest road that climbs steadily to Villaroger, from here I took the road up to Le Planay, where the tarmac ends. I stopped for a bite, which unfortunately allowed my legs to cool off just before the most gruelling kilometer of the day.  The track was rough and the gradient 12% + in places.  I didn’t know whether to concentrate on keeping the bike upright, or keeping the front wheel on the ground and really thought my planned ascent was doomed, but soon enough the track turned into a steady easy gradient (made from powdered marble) and remained like that for the rest of the ascent.  Perhaps the bottom section was there to test peoples resolve or put people off.

The track came out on the tarmac road that runs between Les Arc 1800 and 2000.  The sight of Les Arc 2000 looming over me was not a pleasant sight, and it had the added down-side that it was a dead-end, one of my pet hates.  I thought about giving it a miss but decided to go for the ‘tick in a box’.  I had loaded that section into my GPS but realised half way up that my GPS route stopped quite a long way before the resort, and that all the missing metres were up.  The resort was like the Marie Celeste, not even a coffee shop open.  It’s not the most attractive winter resort, so its summer ‘look’ was even worse. Definitely not a repeatable experience.  I ate my lunch and enjoyed the down hill stretch through the other ‘Arcs’, picking up a great bit of un-surfaced section which kept me higher than the built up areas.

As I descended into Vallandry, my need for a coffee or some kind of drink related stop increased, and I noticed a sign, giving the impression that a cafe was open somewhere.  My hunt for Chez Betty was long and hard and eventually rewarding.  Betty was a lady with a big smile, and a coffee machine.  I think she was as pleased to see me as I was to see her. It must get lonely up there all day.

(picture left: Me with the head-cam on. Road above Landry.)

Then there was the decision point.  At the Peisey Nancroix valley road, do I have the focus and commitment to turn left and do the additional loop over to La Plagne or do I just turn my wheel for home.  And the answer is ……… I don’t have the focus or the commitment.  The idea of sitting on my balcony with a cold beer and sauntering down to the butchers for a sausage for tea was just too enticing.  As part compensation for my wimpery, I decided to explore the small roads above Landry rather than going down the main road.  What a blast!  Probably the best track of the day, all down-hill, mainly un-surfaced and at the edge of what a road bike can comfortably do.  With the help of Betty’s coffee I was hoofing it and decided to stop worrying about my expensive wheels.

Just to round the day off, and widen the grin on my face, I found a fridge full of beer on the empty lower floor of the chalet.  It solves my beer/pannier/transport problem and I’ll pay the chalet owner when I see her!!

The Verdict. A lot of fun un-surfaced roads (16 out of a total of 58 km) , and in my books, the best way to keep clear of the ski resorts but still see the area.  I wouldn’t include Arc 2000 in future rides. 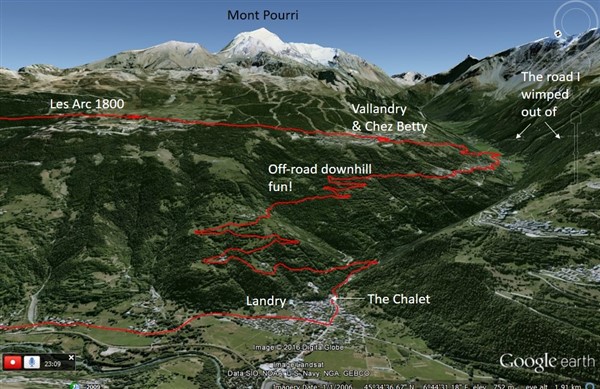 (above: Google earth of the last section of my ride)

(top featured image: Landry Graveyard on the way down the Peisey Nancroix valley.)