Posted on February 3, 2017 by aridelessordinary

This is what happens when a bicycling Geologist is ‘put out to grass’, and the days are short, cold and uninviting to all but the hardiest of cyclists.  The Geological cross-section is based on the first half of the Milk Churn Loop from Esher to Rudgwick, which is written up here. It uses the vertical profile from RidewithGPS, and is filled in using the 1:65000 Bedrock Geology Map from the British Geological Survey, drafted in Microsoft Powerpoint.

The Cross-section shows how the gradients of the route are dictated by the rocks, with the siltstones and claystones being flatter, and the sandstones and limestones forming the tougher climbs.  It particularly accentuates the steepness of the scarp slope of the Chalk on Whitedown Lane (but you do have to bear in mind the vertical exaggeration!).

The Elevation map on the right accentuates the valleys carved by the River Wey and the River Mole as they cut through the Chalk of the North Downs, forming two hill free routes through the hills. 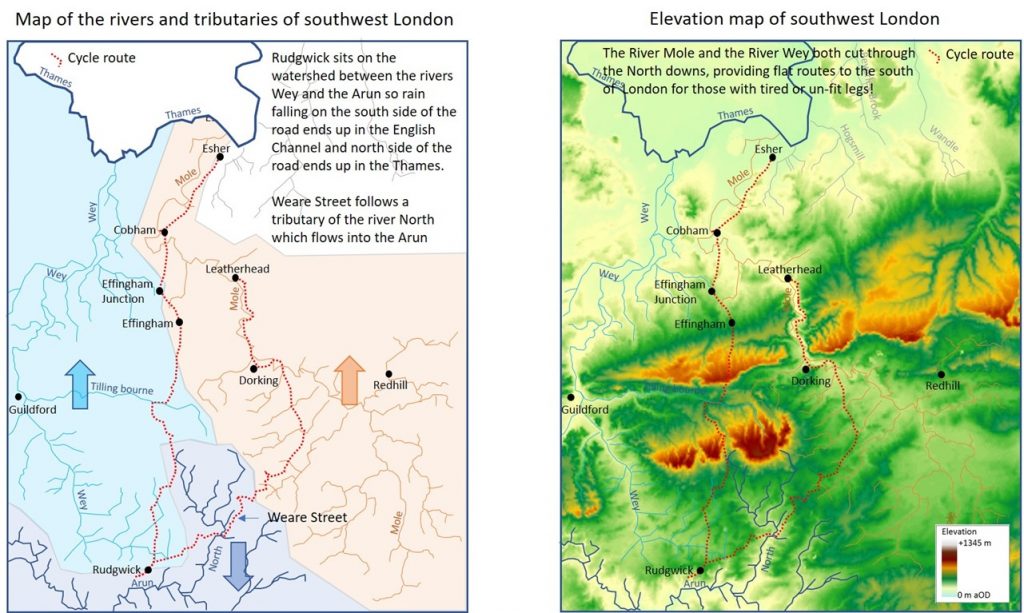 The rivers and tributaries map is based on data from Ordanance Survey (OS) opendata called OS open rivers, downloaded into ArcGis Explorer, tarted up in Microsoft Powerpoint, and the Elevation map is another OS opendata product called OS Terrain 50.  All free for all!