Posted on February 24, 2017 by aridelessordinary

Beautiful trails through pine clad hills, gravel tracks up dry river beds, classic road-bike climbs ….. gambas al ajillo, Rioja.  I will definitely be back for more!  This blog describes my winter escape to seek out some Mediterranean sunshine and to discover some new Adventure road-bike routes in the hills behind Barcelona.

Even the combination of Southern Rail and EasyJet didn’t stop my plans for a week away from the grey skies of London, although they did try pretty hard.  I arrived outside my Airbnb in the Collserola National Parc at around 8.30pm in a light drizzle, and as the taxi pulled away and my attempts at alerting my hosts to my arrival failed, it briefly occurred to me that I should have brushed up on my Spanish and perhaps booked somewhere a little busier.  After the neighbour showed me how to operate a Spanish ‘entry system’ (i.e the bell), my doubts faded, and I found myself in a beautiful loft apartment over-looking a pine and olive clad hill dotted with beautiful Spanish villas.  I was already hooked.

My week was wall to wall blue skies, a couple of great rides, loads of delicious food and the re-discovery of Barcelona after a 26 year ga

The first 5 minutes of this ride was definitely the hardest – 30% ascent straight out of the front door, but with a hint of the herby dusty piney smell that signals all things warm and Mediterranean, I wasn’t complaining.  I pushed the bike to the top of the hill (fearing cardiac failure or at the very least a pulled muscle) and began the ride winding along a ridge through the Collserola National Parc.  Like a lot of the roads in the region, they tend to contour around and follow the ridges where possible, which is great for the views and the legs.  The route took me through Floresta and out onto some great trails through the pine forests.  Such fun that I forgot to look at my GPS and went seriously off route.

The trail stops at El Papiol a small industrial town on the edge of a massive valley cut by the Llobregat river, which starts in the Pyrenees. The valley is a mass of roads, railways and industrial towns, and the sudden contrast from the peace of the forest was quite intimidating.  My pre-ride recce indicated a lot of trails along the valley floor, so I headed for the river and found a large track going in the right direction.

The gravel and mud jeep-track followed the dry river bed and weaved it’s way past allotments, warehouses, under roads and railways, and was a bit like discovering a secret passage that comes out just where you want it (pictured above left).  I eventually emerged onto the start of the road climb up to Ullastrell.  Most road climbs in the area have gradients of less than 6% and never more than 7, and this ascent was no exception. Twelve kilometres later I was in Ullastrell looking for a coffee shop.  Surely a popular cyclist destination would have one?  Ullastrell was perched on a ridge which looked north to the Serra del Colcardus, or south back down the Llobregat valley to Barcelona.  I was left wondering why it was a cycling destination, apart from the fact that it was up a hill (funny bunch these Strava cyclists?).  I failed to find a central area or a cafe and decided to retreat back in the Terrassa direction.

My desire for a coffee and a break was satiated in Can Sola, which could possibly be described as a less salubrious suburb of Rubi.  I was entertained by some spontaneous Karaoke, a man trying to train his dog by shouting at it, and a horse-box full of whinnying horses. Weird combination!  The coffee was excellent and the cafe owners were very friendly (and tolerant of my appalling Spanish).  The trip back was as varied and interesting as my trip out, and I found my self flicking in and out of suburbs and pine forests on quiet roads.

As I neared my home for the week, the suburbs became smarter and I came across an old-fashioned grocers shop.  It was definitely one-up from ‘open all hours’, but born in the same era.  The Spanish lady couldn’t have been more helpful in my quest for the perfect pasta sauce and explained that she had the ultimate sauce arriving next week; alas I would not be there.  I wish she had been in the photograph, but here it is without her.

A great ride.  I was ‘reet chuffed’ that my route finding plans had delivered.  I would change the section around Rubi as it was too busy, and I would also consider continuing to Montserrat to lengthen the ride and significantly increase my chances of finding a decent coffee shop……and see the Monastry, of course!

The weather was set fair and I set off for my second ride, this time with a little more local knowledge. I decided that riding up the valley floor was a better start to the day than the 30% ascent to the top of the ridge.  Although the valley road had slightly more traffic, it wasn’t busy and I quickly found myself at Floresta, but this time heading out in a different direction.  The previous rides forest trails had proven to be totally manageable on a road-bike so I added some more to this ride.  Initially I was disappointed because my new route turned out to be a small paved road rather than soft pine needles, but soon enough it turned to gravel, pine needles & compacted mud. I even found myself cycling along a stream bed at one point.  Although it wasn’t a long section, it was beautiful; probably made more so by the early morning misty light and heavy dew.  The non-paved trail ended at a large mill, complete with millstone next to a large old house with an expensive car in the drive.  I knew the road would be easy from now on!

All too soon I was back out in the wide open space of the Llobregat valley, with its multiple roads, railways, rivers and industry, but before it swallowed me up, I went through a sweet town on the valley floor called Molins de Rei, which appeared to have kept some of it’s original charm.  I was almost tempted by a coffee at a little square but managed to keep my blinkers on for a while longer. My route across and down the valley was straight-forward apart from one very short section where I found myself on a massive 6 lane high-way and suddenly started worrying about how to get off it ….as quickly as possible. Although big, the road was virtually empty allowing me to do a U-turn onto a quieter road.

My route along the valley took me through the quiet suburbs of St Vincenc Dels Horts and Poble Neu before I turned up the valley towards Torrelles de Llobregat and faced the major climb of the day, a 400 metre ascent in 12 km.  The first section up to Torrelles was a wide road with plenty of room and very light traffic, and past Torrelles the road soon changed to a small paved road with virtually no traffic.  The whole section was up a picturesque wooded valley, made more so by the blue skies and empty roads.  I was glad of my ‘granny gear’ on the top section though.  The valley tops out at a plateau dominated by the town of Begues, and the road climb ends in an attractive old suburb of this town, dominated by large houses with beautifully kept gardens full of Cypress trees and ornamental palms, painted shutters and terracotta tiles.  I decided to make a detour into the town and found a modern central square and, much to my delight after yesterdays ride, a coffee shop in the sun with a conveniently placed tree for my bike and fantastic tasting chocolate croissants.  This ride was shaping up to be a classic!

As I left the town, I passed the very elaborate council building, and although it wasn’t in the sun, I thought it was worthy of a photo (it didn’t make the cut, but is worth a visit!).  Onward and downwards, on a main road which descends off the plateau, and in the UK would have been a nightmare, but the drivers in this part of Spain are incredibly courteous and it didn’t feel dangerous at any point.  Eventually reaching Gava, I hung a left and headed through the suburbs of Viladecans, St Climent de Llobregat to Sant Boi de Llobregat, where I was confronted with what was by now becoming a familiar challenge ….getting across the mighty Llobregat valley.  Again my pre-ride reccy paid off, and I kept to my planned route which lead me across the valley on a series of cycle tracks and small roads which linked to the northern suburbs of Barcelona.  The next section of my route through Cornella involved (nonchalantly) walking through a subway and suddenly realising I was on a tram-line platform, which wasn’t really part of the plan, but I hate road tunnels with no cycle lane, so I still think it was the better option! (On return, I realised that section is totally avoidable)

The fun was not yet over, as I had to make a last ascent into the Collserola National Parc, via a steep track to the top of the ridge.  For my last descent, and a perfect end to the day, I found a rideable track through the forest to Valvidrera, before returning to my lofty accommodation and devouring a massive portion of sausage and bean casserole!

Even better than the first ride, due to the increased amount of riding in the National Park.  I have replaced the section through Cornella tram-line station on the Rides download page.  The small section of (very) main road close to Molins de Rei is unavoidable as far as I can tell, but is very short.  There are a limited number of bridges across the Llobregat. Still gets 5 stars in my books! 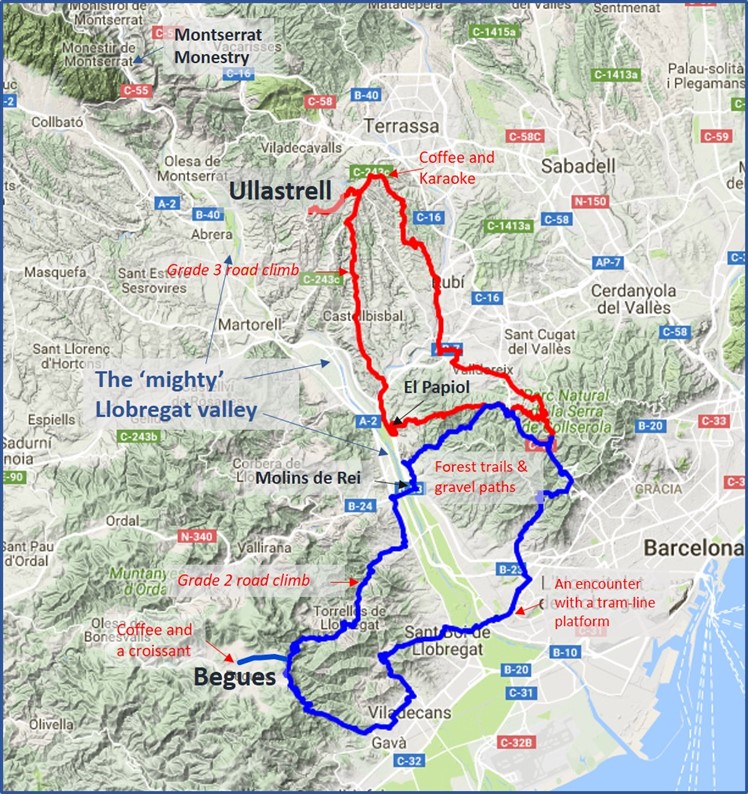 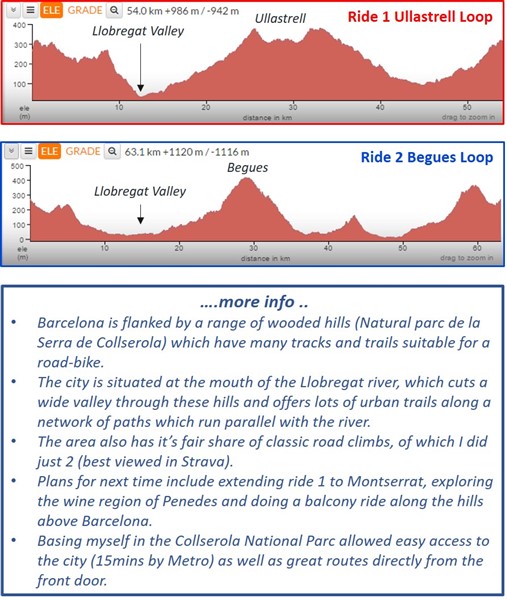