This is a story about one of my early adventures, in the days when cycling was a minority interest, when the internet and mobile phones weren’t even distant dreams, fuel was something you put in your car and GPS was when you had more than one doctor (oops)!

In 1984, at the age of 19, I had survived my first year away from home, and I had my heart set on exploring the west coast of Scotland by bike in my summer holidays. The plan was to stay in Youth Hostels but they were sparse and spread out along parts of the coast, so we took a tent to fill in the gaps. It was the camping experiences which led to some of the most adventurous and memorable parts of the trip, and it’s those that I recount here.

My best friend and potential cycling buddy was too busy having ‘an adventure’ with our handsome French exchange student to accompany me on my planned trip north, but somehow, I managed to persuade her 16-year-old sister to come with me. Neither of us had any idea what we were in for, and nowadays it is quite difficult to imagine our level of un-preparedness.

According to my pre-trip map reading, the section between Invergarry and the Kyle of Lochalsh was particularly wild & remote and the idea of camping somewhere in the middle of this section appealed. I was also in awe of the amount of contours lines on the OS map. Further investigation was imperative! As we set off from Invergarry passing a sign which stated that the next shop was 50 miles away, my sense of excitement grew. We laboured up the long hill past Loch Garry and Bun Loyne to the massive mountains flanking Glen Shiel, and on past Loch Cluaine until at last I spotted a patch of land that looked suitable for camping. I positioned the tent with the door down-wind not realising that it would become an instant shelter for the midges. By 5 am in the morning, we had had enough. It didn’t matter what we did, we couldn’t keep them out. It is hard to describe how it feels to be attacked by midges, but part of the problem is that they are almost invisible, so you sense them in a different way, which easily leads to thinking that you are being bitten when you are not. It became like a mental affliction, with prolonged periods of arm flailing and leg slapping.

Packing up the tent was like something out of a Benny Hill sketch. If we ran fast enough we could outrun the midges and give ourselves enough time to pack a little bit more of the tent away, so we spent half an hour running around a midge-infested swamp stuffing various bits of camping equipment into bags and panniers. In the end we were bent double and breathless from laughing as much as from the running around. At 6am we found ourselves swooping down Glen Shiel passed the impressive 5 Sisters of Kintail on a cloudless blue-sky day, and there really was nothing to dislike about that. We coasted into the Kyle of Lochalsh for an early lunch of deep-fried haggis, from the chippy on the harbour. Midges and Haggis, Scotland was starting to reveal itself!

By this stage in the holiday, it had dawned on me that if we were going to make it to the north coast there was no time for loitering, so we continued until dusk, around the shores of Loch Carron. We were both so paranoid about a repeat performance of the previous night, we decided not to put the tent up and just laid our sleeping bags along the side of the road, and taking it a step too far, my head faced into the wind. It was rather a cool night under the stars, but thankfully midge free.

When we arrived at Torridon Youth Hostel, the bites had had enough time to reveal themselves and a quick count revealed 100 plus bites on each leg alone. Those were the ones that certainly weren’t in my imagination. With 100 miles between Torridon and the next Youth Hostel, over hilly terrain, I knew another camping night was on the cards, but I didn’t want a repeat of either of the previous experiences, so this time I picked a wind-swept cliff top for the pitch. Oh dear. It had the advantage of a hotel near-by, and after pitching our tent (very securely) we retreated to the peace of a completely empty hotel bar and a rather confused barman, who obviously wasn’t used to any customers, let alone a couple of wind-swept young women. He put some money in the duke-box and we all sat there with lumps in our throat listening to his favourite song, a poignant rendition of ‘Amazing Grace’. It was a very surreal moment. 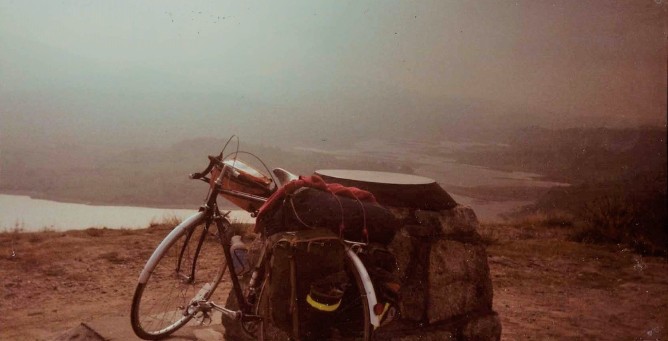 Outside in the real world, the weather was whipping up a storm and as we reluctantly left the warmth and dry of the hotel, our minds turned to the challenge of keeping warm and dry on our wind-blown cliff top. We lost this particular challenge and were both awake at 5 am in soggy sleeping bags. It wouldn’t have been so bad if we could have had a cup of tea, but the matches were wet. That’s what did it for me. As we packed up our soaking belongings and got back onto our wet saddles I was kind of wishing ‘Grace would lead us home’; and in a way she did!

After climbing steadily away from the sea, we found ourselves on a windswept moorland, but in the distance, parked down a track off the road, was a massive army lorry. I wheeled my bike down the track and banged on the door, way above my head, wondering whether anyone was inside. The window rolled down and a friendly (slightly surprised) face said hello. I asked him if he could spare a match so that we could light our stove and make a cup of tea. He said he could do better than that and did we want a Full English breakfast courtesy of the British Army? Yes please! We all sat in the back of the truck in the warm and dry, opening endless tins and cooking up a breakfast to remember. They asked us where we were going, and did we want a lift? I looked out of the back of the truck into the grey relentless drizzle being blown in sheets across the moor. It wasn’t a difficult decision. We pulled our bikes into the back of the lorry, all squeezed into the cab and set off for Ullapool.

After many more toils, snares and weird and wonderful experiences, and having made it from Glascow to Thurso, I eventually got home. Mum was standing at the kitchen sink peeling potatoes and when she asked me how we’d got on, I was completely stumped for words. I was so filled up with the wonders of it all, how could I possible convey it in a single sentence?

I could mention my surprise at the massive scale of the scenery or the tiny empty roads and deserted white sandy beaches, or what about the weather being so ferocious in Achmelvic that it was too dangerous to leave the hostel, then there was encountering the haunting sound of  a loner piper next to a loch, discovering how to make haggis, neeps and tatties, and making a brew on Glascow train station concourse at 6 am in the morning (!), before I could even start on the wild camping adventures …………

It was a holiday that shaped my future holidays, and my future dreams.

We cycled over 500 miles and ascended over 10,000 metres, in two weeks.  But it is never about the metrics to me, either then or now!   I say that because in many ways it is true, but when I really think about it in the context of our ages, our equipment, and yes, the fact that we were women and not men, I think it is quite remarkable.

We had 3 punctures all mended with a puncture repair kit by myself , because in those days nobody considered taking a spare inner tube!!!!

I recreated my route in RidewithGPS, 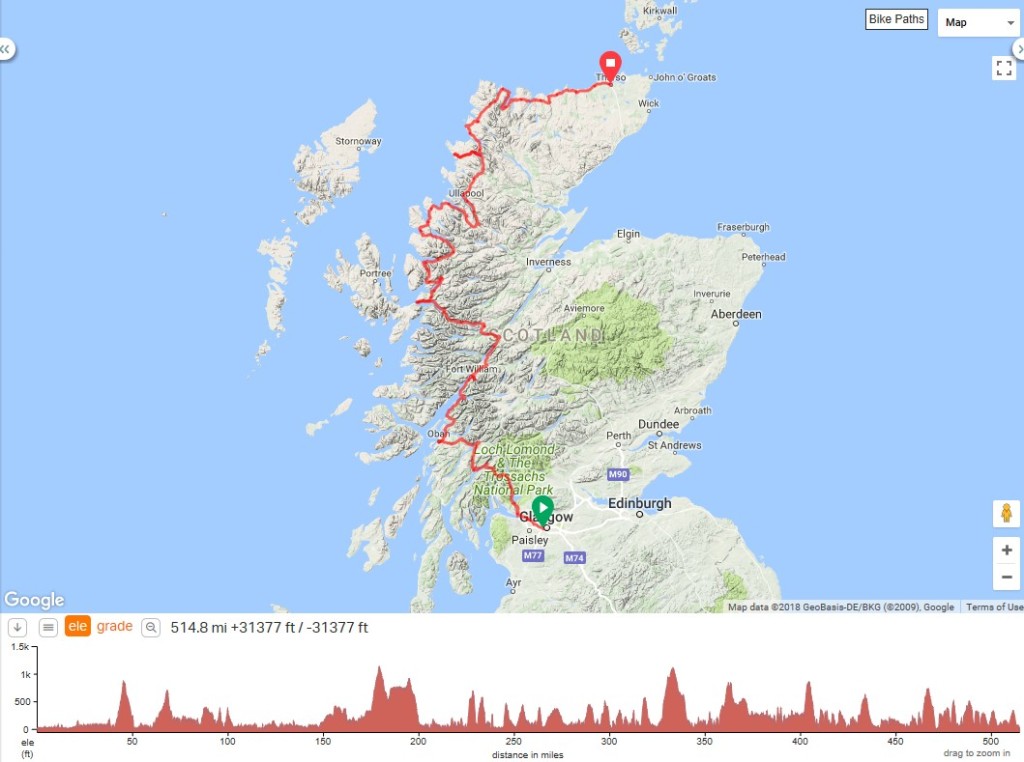 ← All about the bike
Conquering your own Everest →