Posted on June 17, 2016 by aridelessordinary 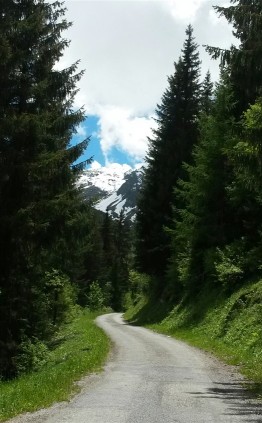 The plan to do the Roselend Epic (via the ‘closed’ Cormet d’Areches road) with a local cyclist called Ben had cratered. It was raining at 8 am and then again at 9 am and after a bout of email ping-pong we decided against it.  It was a ride that for some reason had captured my imagination and I really wanted to do it in good conditions.  At 11 am there was a gap in the clouds, and I was hastily on my bike.  Decided to explore the small roads around La Plagne and link to the Peisey Nancroix valley.

The Ride.  I felt I had neglected this side of the valley a bit, because it is on the north-facing shady side and also has the ski resorts on it, both points against it in my quest for the perfect route. True to prediction it was chilly and I wished I had my full-fingered gloves on.  That said, as I started to climb the small switch-back road out of Macot-la-Plagne, the clouds lifted giving some great glimpses of the ‘sunny side’ mountains and a tantalising glimpse of the Cormet d’Areches valley that we had planned on climbing.

The old narrow road was between 8 to 10 percent all the way up, but in my normal style, I just put the bike in ‘first’ plodded and day- dreamed my way to the top, with my legs and lungs now thinking it was par for the course.  I ignored my GPS and found my self way-off route.  I descended back down and found myself back on course, contouring around the side of the mountain through pine forests on un-surfaced roads, which were easy for a road bike, even with a lot of water on them.

Back on small tarmac roads and going through the lower parts of the La Plagne resort at around 1600 ms, I recognised some of the lifts and runs from a ski holiday 5 years ago. After more contouring around the hill and up a small valley which linked to the Peisey Nancroix valley, the basic tarmac road turned in to a rocky jeep track descent to the village of Nancroix.  A tough descent and not for road-bikers with no mountain biking experience. Hard on the hands and had to ‘pick a line’ ……..for a little too long.  Would be better with disk brakes I think.  Whizzed down the valley back to the chalet, max speed 72 km/hr.  Perhaps I was a little too enthusiastic to be back on tarmac!

The Verdict.  Some great views and a real variety of surfaces.  Definitely better going up the un-surfaced sections rather than down so would choose to do this ride backwards.

(top featured images, left;looking across to the ‘sunny-side’ valley near Granier from La Plagne, right; road to Peisey Nancroix from La Plagne)

← The Southwest passage
Photo-shoot and a surprise find →